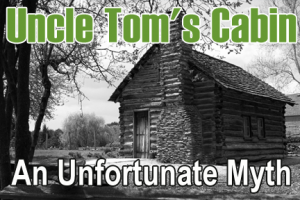 A big lie has been perpetuated for more than a century, about the character of a character known as “Uncle Tom!” I hope to set the record straight here, and that many will choose to learn the truth, by reading one of the greatest and most controversial books in American history.

Uncle Tom’s Cabin, a book by Harriet Beecher Stowe (1852), meant to expose the hideous practice of SLAVERY, for what it was. However, although an instant best-seller, the book soon met with enormous opposition, that caused many to believe and spread an unfortunate myth, and to ignore truths that might have helped heal a divided nation, short of a deadly Civil War.

Many African Americans still use that misnomer to shame other black people they think of as “weak, go-along” sorts—“sell-outs to white masters.” But, why defame “Uncle Tom?”  Where did that comparison come from, about a character I’ve come to admire as one of the greatest men ever written about—fictional or real?

Black slaves, likely unable to read Stowe’s stunning book back then, or barely even to speak English, no doubt believed the propaganda of the book’s CRITICS, who portrayed Uncle Tom as a traitor to the black race. Yes, an unfortunate myth!

Who Was “Uncle Tom”?

Uncle Tom’s Cabin  describes its main character as a gentle, amiable black slave named Tom—a man of deep faith, loyalty and integrity. A victim of a cruel injustice in those times, Tom worked hard to keep his family together; not sold off separately, like chattel to the highest bidder. A man of his word, Tom obeyed his “owner” so long as the requirements did not compromise his faith and moral convictions. Closer examination shows the character as, I would say, a powerful role model for black people and others alike, even today. But, those who profited by the slave trade then wouldn’t have wanted THAT to get around. Stowe’s book posed a threat!

Ultimately, Tom chooses to die at the hands of a vicious slave master named Simon Legree, rather than betray two slave women who had escaped. In that, “Uncle Tom” proved one of the most Christ-like characters ever to grace the printed page. Uncle Tom exhibited colossal courage and character, as he laid down his life, rather than betray others!

The Bible says, “Scarcely for a righteous man will one die… but God demonstrated His own love toward us, in that while we were still slaves to sin, Christ died for us.” [Romans 5:7-8]

In 1977, I moved with my three children to Nashville, Tennessee, and have since learned much about the south and its history. My Louisiana-born husband Philip and I love to read historical and other thought-provoking books together. A few years ago, we decided to tackle a rather large volume, titled Uncle Tom’s Cabin.  As a southerner, and “baby boomer,” Philip remembers some of the harsh realities of bigotry that lingered long into the 20th century. For my part, originally from California, much of my life was relatively untouched by the true story of slavery in America.  However, my husband and I agree, slavery was an ugly blight on our nation—one never to be repeated!

Sadly, I realize now, many black people believe they are still victims of “white supremacy.” Yet, I believe the greater majority of our society has come to recognize the equality and worth of all humans; all races. Many black Americans have risen to high and influential positions in our nation over the past decades; in the military, as high-ranking statesmen and women, as mayors of major cities; even as president of the United States. Many excel in business, medicine, science, media and journalism; in the arts, sports, and in academia, etc.

Are all of THOSE “Uncle Toms”… somehow “sold out,” as some black people were taught to believe?

I like to believe, rather, those have courageously overcome any victim-mentality passed on to them by more cynical blacks, or purposeful or political race baiters?  Thankfully, many seem to have been able to look past the ignorance of any lingering prejudices in our society, and to make their way.

With Uncle Tom’s Cabin published in 1852, abolitionists and Northerners generally praised Harriet Beecher Stowe’s fictionalized, albeit candid depiction of the inhumane and often gruesome nature of the slave trade, and they were quick to confirm the truths Stowe had written about.

On the other side, PRO-SLAVERY advocates claimed that Stowe was “misrepresenting slavery and exaggerating the cruelty of the institution.” They said her book was “a distortion of the facts and a mutilation of the records, for the sake of giving substance to a scandalous fancy.” Interestingly, they didn’t accuse her of using false documentation. Rather, they claimed that, “The examples Stowe provided are the most extreme instances, meant to give the worst possible impression of the institution of slavery, and of the south.”

Were there those wealthy landowners who took in slaves to keep them from the auction blocks that demoralized many blacks for profit then?  I suspect there were. I’ve found southerners to be, generally, kind, God-fearing and hospitable. I would hate to think that back then they were overcome by some collective evil spirit void of compassion for those black immigrants. But, how many, otherwise good, people in Germany looked the other way when the Nazis victimized the Jews during WW2?

Slavery is a monstrous thing, and Harriet Beecher Stowe was courageous and right to expose it as she did!

Other pro-slavery reaction to Stowe’s writing was more a critique of her character, than a critique of the work itself. One review, by George Holmes, questioned Stowe’s writing of the truth as a “lack of decency,” portraying “scenes of license and impurity, and ideas of loathsome depravity.” Holmes appealed to women, especially southern women, NOT to read Stowe’s writings.  History proves that the so-called “decency” of many of those women and men of the time turned its back on other human beings who truly suffered, often the cruelest enslavement.

A Legitimate, Yet Unrecognized Hero

It seems there has always been, and may always be, those who would demean, oppress, enslave, even destroy others to further their own ambitions. Corrie ten Boom met head-on with that in her time!

On the other hand, I believe the power mongers of our world, and any of us, could learn much from the character of an “Uncle Tom.” Compassion for other human beings, as Jesus showed us during his time on earth, is what brings greatness to a person or a people. Tragically, those such as Adolph Hitler, the fictional Simon Legree character, and other Judases, are remembered only with disdain, if at all.

I highly recommend that everyone read “Uncle Tom’s Cabin”—especially black Americans. The truth is a great healer—our nation longs for it!