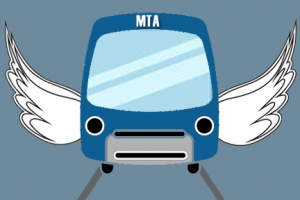 I’ll never forget that day, and that strange ride on the MTA bus line in Nashville!

“Do you believe in angels, Mom?” I remembered my young son’s question, as if it was not 40 years ago. My preoccupied response to his question had been a decided, “No!”

Personally, I had never seen an angel, and had placed the possibility of such a creature alongside Santa Claus and other childhood tales. It would be a long time before I read a scripture verse that says, “Do not forget to entertain strangers, for by so doing some have unwittingly entertained ANGELS.”

It was the summer of 1984 and I had been riding buses, seeking employment, since giving up on my pursuit of music stardom. Months earlier, faith had finally replaced misery for me, while visiting a large Nashville church. Carrying a huge chip on my shoulder, I’d gone there at what seemed the bottom of my life, arrogantly challenging God to, “Show yourself, if you even exist!”

Truth is, I should have been squashed like a bug on a windshield for my feisty approach. Word to the wise: Even if you don’t believe in God—unless you have all knowledge yourself, it’s wise to reconsider, should you decide to shake an ignorant fist in God’s face, as I did that day. Just saying!

However, I was stunned, to say the least, when the most gentle, albeit firm Voice actually spoke right out loud to me. I learned the meaning of grace that day.

My life situation wasn’t quick to change then, but my perspective on almost everything else had instantly, and I believe miraculously, done an about-face.

By now, I was sure I wouldn’t be at all surprised to meet up with a real live ANGEL.

Angels are people, too!

The alarm clock startled me at 5:30 that morning. It seemed only minutes before I had finally fallen asleep after a rough night of coughing and sneezing. A quick swipe at the frosted bedroom window with a rumpled tissue told me; at least, it had stopped raining. But, something was wrong—more wrong than that monster head cold!

Since hearing the Voice, most days I woke with a deep inner peace and a positive outlook. “Surely this will be the day I find a job!” But, this morning was different.

Trying to find a job without a car left me with one choice—the Nashville Metro Transit Authority (the “MTA”).  I was thankful for that, but, unfortunately, I’d never gotten used to the smell of diesel fumes, for all the years I traveled and sang with Grand Ole Opry star “Whispering” Bill Anderson, on his Silver Eagle bus.  But, that’s for another story!

The thought of bus fumes this morning only added to my nausea, but going back to sleep was not an option. I had a job interview at Belmont College (now Belmont University), and I needed a new income. The mirror told me it would take the “big guns”—stage makeup—to make myself look at all presentable.

“Nobody wants to hire an ex-roadie-turned-Jesus-freak, anyway!” I moaned. Numerous job applications had turned up nothing solid. No one seemed to understand—my life had changed so much, I didn’t plan to head out on the next show bus.

Still, the days had dragged on, and my faith was sagging for the first time since hearing Him say, “You’re going home, Susan!” How could I ever lose heart after that? Still, here I was. Poor, poor, pitiful me!

The interview at Belmont went well enough, and I got the job. But, my head pounded as I left the Belmont campus that day and boarded the #2 Belmont bus headed downtown.

The familiar publishing houses and recording studios flashed by the windows as the bus wound through Music Row toward Broadway, where I would have to wait for yet another bus to take me home, south of town.

Months before, I’d promised God that, as long as I had to ride the MTA, I would pray for every soul I rode with every day.  I’d kept that promise, but this day I just wanted to be left alone; certain my conversation would be less than inspiring.

I was seated in one of those sideways seats upfront, behind the driver, when the bus came to a stop and an elderly black woman got on. Toting a couple of huge plastic bags, she quickly flopped all of herself and her treasures onto the seat right by me.

“Only a few other people scattered about the bus, and she has to sit down right next to me,” I protested silently. “Okay, I’ll pray for her, God, but I don’t feel like talking to anybody today!”

There she was, right beside me now. The old woman’s chocolate eyes sparkled and smiled, almost as broadly as the toothy grin that exaggerated her otherwise small, weather-worn face. “What does she have to be so joyful about?” I wondered, behind a token smile. Before long, I would have the answer.

Trying not to stare, I noticed she wore several layers of old clothes, likely her entire wardrobe. Buttons strained to hold multiple sweaters together. Nothing matched anything else, from the brown knit hat that covered most of her salt and pepper hair, to the out-sized granny shoes on her feet. It was all I could do not to laugh, despite my resolve to bask in a pity party.

“Okay, God,” I finally capitulated, “If you want me to tell that lady about your Son, you need to give me an opening!” Surprisingly, the old street woman spoke first.

She was full of information about the history of “Music City.”  Her thick brown knee socks sagged annoyingly. But, it only allowed her constantly animated hands one more lively gesture, as she gave the socks an occasional tug. She talked about the weather and the city’s plans to turn the old Union Station Depot on Broadway into a “fancy” hotel.

Surely, she would take a breath and I would be able to say something. Feebly, my nose still trying to run off my face, I tried to jump in a time or two, but I guess the most I was ever able to say was, “Well, I…” or “Yes, but…,” and she was off, onto another subject.

Don’t get me wrong, she certainly wasn’t boring or negative; in fact, she was downright funny!  But, getting a word in edgewise, I decided, would take a sure act of God.

Finally, the bus came to another stop and this irritatingly joyous—but “lost” I was sure—bag lady jumped up energetically, to get off the bus.

“Well,” she said, wrestling comically with her bulging bags, “Nice talkin’ to ya!”

I smiled weakly and nodded, feeling like a complete failure for not being more forthright to tell her about Jesus, and that He loved her. She shot one last oversized grin at me; then, elbows in the air, she hauled her bundles toward the bus steps.

“I blew it, God, I’m sorry,” I sulked, wishing I was home in bed. “Now she’ll probably never know You!”  A sympathetic smile, if not a big LOL, might have filled His face; shaking His head over my still infantile faith.

Then abruptly, half-way down the steps, that funny old woman turned and ambled nimbly back up toward me. Placing a dark, ancient hand on my knee, and searching my eyes with a depth and compassion I hadn’t noticed before, she said, “Don’t ever stop talking about Him!”

Then she leaned in closer and said again, “Don’t you EVER stop talking about Him!”

Touched by an Angel?

I must have turned angel-robe white! I had not been able to say a word to the old “woman,” about my faith or even myself, on that bus ride down Broadway.

I sat stunned as the bus door closed behind her, and she was gone. I mean, she was just gone! I looked both ways on the street. Gone!

It occurred to me then; there were no bundles in her hands when she had stepped back up the stairs. More amazing, I didn’t feel ill anymore either! A renewed joy crept up all over me as I realized what had just happened.

“Oh, dear God, that wonderful old street person was from You!” Tears flowed even as I wanted to laugh right out loud at God’s sense of humor, and the method He’d used to lift my spirits. Surely, He had sent an unlikely messenger to encourage me that day. I had to tell about Him, even if it sounded just plain crazy to the whole world.

I was more assured than ever that God’s word is true. “Angels ARE real,” I told my now-much-older son. “Sometimes they even ride the MTA!”

For He shall give His angels charge over you, to keep you in all your ways…Psalm 91:11

[From Susan Beyer’s book, Above “Reality”: Where Miracles Happen and Healing Begins – Available at Amazon.com]